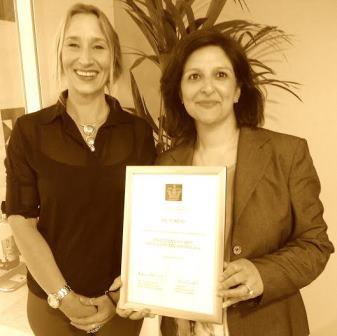 Berkshire charity ABC to Read has won the Queen’s Award for Voluntary Service, in recognition of its outstanding work with local children who are struggling with their reading.
ABC to Read, which celebrates its 10th anniversary this year, works with Berkshire children who are identified by their teachers as struggling to read. The charity recruits, trains and supports community volunteers as reading helpers who commit to assisting each child for at least three terms. They give children a brighter future, focussing on their achievements and building reading confidence.
The charity has seen extremely high success rates in recent years, with their latest annual report showing an impressive 98% improvement in reading performance and 97% improvement in children’s attitudes towards reading.
The Queen’s Award is the highest award given to local volunteer groups across the UK to recognise outstanding work done in their own communities. It was created in 2002 to celebrate the anniversary of the Queen’s coronation. Any group doing volunteer work that provides a social, economic or environmental service to the local community can be nominated for the award.
A spokesperson from Hawkedon School, who benefit from ABC to Read mentors, said: “ABC to read is a fantastic organisation which not only supports children with their reading but also develops their interpersonal skills and boosts their self-esteem.”
Marcia Rowlinson, ABC to Read Chief Operating and Development Officer, said: “We are extremely honoured to have won the Queen’s Award for Voluntary Service – especially in the year we are celebrating our 10th anniversary. It is such an encouragement after many years of hard work, building the confidence of our local children through reading. Thank you very much to those who nominated us and to those who make the work that we do such a success.”
Ms Rowlinson will attend a reception at Buckingham Palace on 10 June to receive the award from Her Majesty the Queen.
Anybody interested in becoming a volunteer for ABC to Read, or any schools interested in joining the programme, should email: abctoread@btconnect.com
About ABC to Read
ABC to Read trains and supports volunteers in primary schools across Berkshire, helping hundreds of children each year to enjoy reading and gain an essential skill for life. The charity has maintained around 100 volunteers working with 300 children each year to improve their reading skills.  The children are chosen by the schools as those in most need of reading support.  The volunteers are selected by the charity and are CRB checked, trained and supported. ABC to Read is currently campaigning to increase awareness of their work in order to reach more Berkshire children. More information can be found at www.abctoread.org.uk
About the Queen’s Award
The Queen’s Award for Voluntary Service is the highest award given to volunteer groups across the UK. Any group of two or more people doing volunteering work can be nominated for the award. The majority of the group must be volunteers and more than half the volunteers must have the right to live in the UK.
To be nominated they should do work that:
Volunteer groups should have been running for 3 years or more to be nominated.
Local assessment panels look at all the nominations and decide which ones to send to the National Award Committee. The committee makes recommendations to the Cabinet Office, which sends a final list to the Queen for her approval. Winners are announced on June 2 every year.